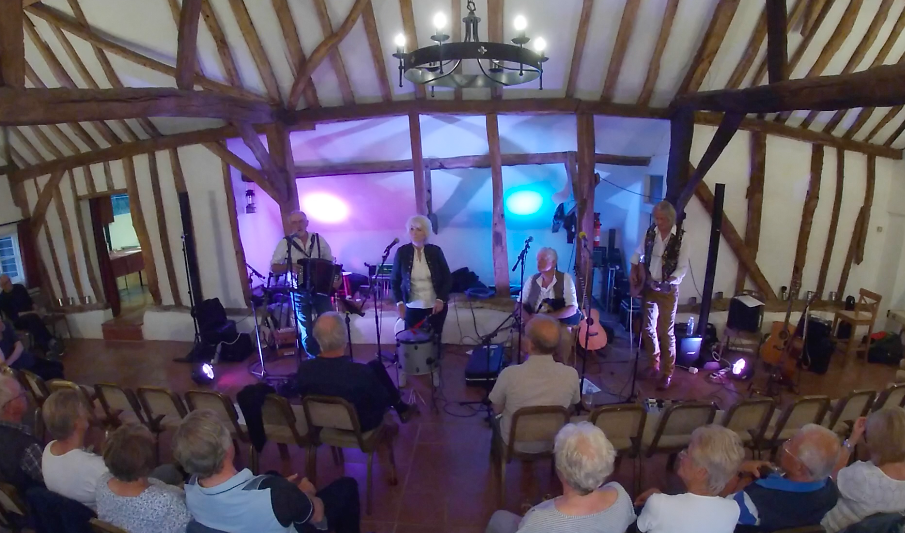 “We are all excited about your booking” – say Walthamstow Folk Club, where we will be performing on December 4. Liz who helps organise the club came to see us at Stony Live and a booking quickly followed. They absolutely speak for us too as we are thrilled to get a booking at this major folk club.

15 June 22 – Chequers Folk Club – a welcoming club held in a stunning barn in Great Kingshill. Many thanks to Philippa, Colin and John for having us , for asking us back next year and for recommending us to yet another folk club.

5th and 6th June 22 The Star and Garter at Silsoe followed by Stony Live Festival at the Crown Inn, Stony Stratford. We love playing to our “home crowds”. A major folk club organiser came to see us and wants to book us!

23 April 22 – Not content with playing in the same band, Phil and Denise got married in a canalside ceremony at Stoke Bruerne. Denise has decided that her stage name will remain Denise Dryburgh. Phil wants to be known as The Artist Who Used to Be Known As Phil Underwood – And Still Is .

7 March 2022 – Tonbridge Folk club – thanks to the club for a warm and friendly welcome.

“The Pitmatics set about entertaining us in style with an eclectic mix of traditional and contemporary material. A good blend of voices, skilful accompaniment with a variety of instruments, but above all they approached their work with an enthusiasm which was infectious. If you want a band which can relate to their audience and hold their attention, book them!” Roger Resch – Tonbridge Folk Club

We will miss Heather and Caroline who have left the band due to pressure of work and family matters. However The Pitmatics will continue as a four piece. We are busy rehearsing some great new numbers for our first gig of 2022 at York House, Stony Stratford. And we are excited to be getting interest from several venues in 2022.

Great audience numbers at The Place in Bedford. Really nice venue completely suited to our big lineup. Thanks to Chris on sound and to the management and volunteers who keep this venue a great place to come, entertain and be entertained.

A fine gig at the friendly Wurzel Bush Folk Club in Rugby. Many thanks to Gary and his team and all who came.

3 September 2019 – We played Bracknell Folk Club and received a warm welcome from the capacity audience. This is what they said about us:

“A splendid evening’s entertainment and it’s not often someone turns down a floor spot because they want to hear more. The carefully crafted numbers were moulded around their multiple instruments and there were no one-trick ponies in this crew. They provided a barnstorming performance with songs familiar and songs previously unheard, songs with choruses to join in and even an a cappella music hall number. There was plenty of foot-tapping in our larger-than-usual audience and the applause spoke for itself.” Steve, Bracknell Folk Club.

22 June 2019 – We were delighted to open the Main stage at Dinglefest on the Saturday in front of an estimated audience of 500. An amazing setting boasting 3 stages. Performing was great fun and we received some excellent feedback.

Founder member Charley Foskett has been a major influence on the band’s direction – he has moved on to other projects and we wish him all the best. During his time the band has collaborated with great artists like Julie Felix.

13 October 2018 -Played the Civic Hall, Berkhamsted in aid of the Hospice of St Francis. Audience of 200 received us enthusiastically and Ned declared “we all did very well” .

“What an amazing night.. congratulations on a fantastic evening.. heartfelt thanks.” Lucy Hume, Head of Community Fundraising, The Hospice of St Francis

15th and 16th October – Rehearsal with Julie Felix for our gig with her at the NAF Folk Club on 6th Nov. It’s an honour and pleasure to be working with such a great artist and lovely person.